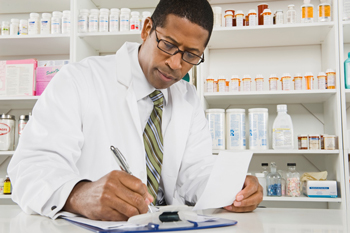 Opioids are medications that act on opioid receptors in both the spinal cord and brain to reduce the intensity of pain-signal perception. They also affect brain areas that control emotion, which can further diminish the effects of painful stimuli. They have been used for centuries to treat pain, cough, and diarrhea.

The most common modern use of opioids is to treat acute pain. However, since the 1990s, they have been increasingly used to treat chronic pain, despite sparse evidence for their effectiveness when used long term. Indeed, some patients experience a worsening of their pain or an increased sensitivity to pain as a result of treatment with opioids, a phenomenon known as hyperalgesia.

Importantly, in addition to relieving pain, opioids also activate reward regions in the brain causing the euphoria—or high—that underlies the potential for misuse and substance use disorder. Chemically, these medications are very similar to heroin, which was originally synthesized from morphine as a pharmaceutical in the late 19th century. These properties confer an increased risk of substance use disorder even in patients who take their medication as prescribed.

Overdose is another significant danger with opioids, because these compounds also interact with parts of the brain stem that control breathing. Taking too much of an opioid can suppress breathing enough that the user suffocates. An overdose can be reversed (and fatality prevented) if the compound naloxone is administered quickly. Learn how to reverse an opioid overdose with naloxone.